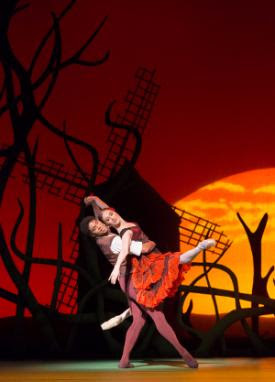 (The Washington Post) At 42 — an advanced age by ballet standards — and in what may be his final appearances in Washington, the Cuban-born Acosta swept us all into what looked like his dream-come-true. He has inhabited Basilio hundreds and hundreds of times, but Tuesday he was as spontaneous, delighted and buoyant as if he had just been given the role of a lifetime.

It was a gift to himself, for Acosta also staged the ballet (largely hewing to the original by Marius Petipa). But it was also a gift for us: He gave the audience plenty of time to savor his high vertical jump; his long, elegantly stretched line from fingers to toes; and the sharp action of his legs. Best of all was his living energy, a commitment to telling the story.

He and Núñez communicated throughout the ballet with vivid gestures, body language, cutting looks and a kind of sixth sense possessed by the rare dance partnership, which enables them to fall in step and match their moves. But Acosta was not only a sassy and stalwart partner. (His one-handed lifts drew gasps.) With eloquent gestures, he connected with everyone onstage and with the audience. After one solo, he acknowledged the applause with a gracious flourish to the Opera House orchestra; after another, he saluted the uppermost balconies. Here was the embodiment of charm. (read full text)

Posted by Joaquin Estrada-Montalvan at 10:11 AM