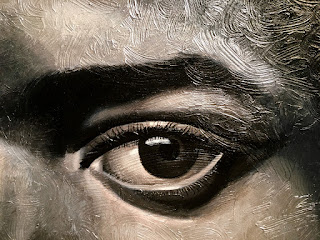 An impressive large format portrait exhibit will open in South Florida on March 9, 2019 at the Sardiñas Gallery of St. Thomas University and is scheduled to remain on view until early April 2019. “Painting Provocateurs,” as the show is titled, consists entirely of the work of visual artist Miguel Rodez, who sought to pay homage to 20thCentury masters such as Salvador Dali, Pablo Picasso, Frida Kahlo, Andy Warhol, and Jean Michell Basquiat, among others. Although Rodez accurately depicts his subjects, he emphasizes the painterly quality of his pieces through the use heightened color and prominent brushstrokes that have become his signature style.

Rodez is also known for his use of the tondo (round) format, of which he has become a leading proponent of its revival. Although other artists have occasionally painted on round canvases since even before the Renaissance, Rodez devotes most of his body of work to that format. He is also putting together a project aiming to collect the work of over 100 Cuban artists who paint on tondos.

For the St Thomas University exhibit featuring Miguel Rodez’s work, Aldo Menendez, a well-known journalistic art critic, who has written countless articles on Cuban Art for various periodicals, wrote an essay about Rodez’s work that is included in the catalog, which the University is publishing for the show.

Posted by Joaquin Estrada-Montalvan at 5:45 AM