Mons. Viganò: The Pope must resign 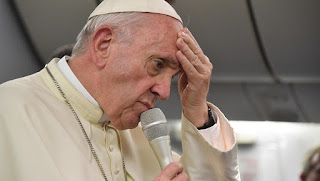 In an extraordinary 11-page written testament, a former apostolic nuncio to the United States has accused several senior prelates of complicity in covering up Archbishop Theodore McCarrick’s allegations of sexual abuse, and has claimed that Pope Francis knew about sanctions imposed on then-Cardinal McCarrick by Pope Benedict XVI but chose to repeal them.

Archbishop Carlo Maria Viganò, 77, who served as apostolic nuncio in Washington D.C. from 2011 to 2016, wrote that in the late 2000s, Benedict had “imposed on Cardinal McCarrick sanctions similar to those now imposed on him by Pope Francis” and that Viganò personally told Pope Francis about those sanctions in 2013.

Archbishop Viganò said in his written statement that Pope Francis “continued to cover” for McCarrick and not only did he “not take into account the sanctions that Pope Benedict had imposed on him” but also made McCarrick “his trusted counselor,” claiming that the former archbishop of Washington advised the Pope to appoint a number of bishops in the United States, including Cardinals Blase Cupich of Chicago and Joseph Tobin of Newark.

Archbisop Viganò, who said his “conscience dictates” that the truth be known as “the corruption has reached the very top of the Church’s hierarchy,” ended his testimony by calling on Pope Francis and all of those implicated in the cover up of Archbishop McCarrick’s abuse to resign. (Read full information at National Catholic Register)

Open letter by Card. Marc Ouellet on recent accusations against the Holy See

Posted by Joaquin Estrada-Montalvan at 7:22 PM