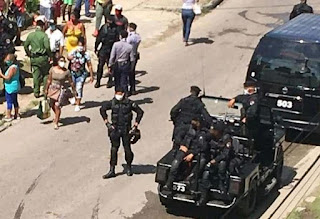 We, the Foreign Ministers of Austria, Brazil, Colombia, Croatia, Cyprus, Czech Republic, Ecuador, Estonia, Guatemala, Greece, Honduras, Israel, Latvia, Lithuania, Kosovo, Montenegro, North Macedonia, Poland, Republic of Korea, and Ukraine, and the United States Secretary of State, condemn the mass arrests and detentions of protestors in Cuba and call on the government to respect the universal rights and freedoms of the Cuban people, including the free flow of information to all Cubans.
On July 11, tens of thousands of Cuban citizens participated in peaceful demonstrations across the country to protest deteriorating living conditions and to demand change. They exercised universal freedoms of expression and assembly, rights enshrined in the Universal Declaration of Human Rights, the American Convention on Human Rights, the Inter-American Democratic Charter, and the European Convention on Human Rights.
We call on the Cuban government to respect the legally guaranteed rights and freedoms of the Cuban people without fear of arrest and detention. We urge the Cuban government to release those detained for exercising their rights to peaceful protest. We call for press freedom and for the full restoration of Internet access, which allows economies and societies to thrive. We urge the Cuban government to heed the voices and demands of the Cuban people.
The international community will not waver in its support of the Cuban people and all those who stand up for the basic freedoms all people deserve.
---------------------

Posted by Joaquin Estrada-Montalvan at 4:10 PM