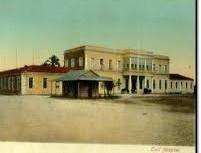 "Hospitals: There are established hospitals, and buildings that could be made immediately available , with capacity sufficient to accommodate nearly 2,000 patients.

Numerous residences could be readily converted into quarters for the sick. The hospitals and some of the buildings are as follows:

American army hospital, one - quarter mile northwest of camp and one - half mile from railroad station, with which it is connected. Leased, double building, 70 by 30 feet; tile floor; one story with portico; large patio; no modern closets; cistern; artesian water from camp used; accommodations, 30 patients and corps men. Another similar house opposite; available in case of military emergency.

General hospital, situated on open ground, northeast corner of city, opposite stations of Cuba and Nuevitas Railroads. A large building, 300 by 350 feet, inclosing patio. Central part of front building is two stories and used for nurses. The building was erected by Spaniards for infantry bar racks; was afterwards used by them as a hospital. Used by Americans as a barracks for 1,000 men, and again by Cuban Government as a hospital. Spaniards crowded 2,000 patients into the building, but the proper capacity is about 500. Has long wards on sides, private wards in front, and kitchens in Water supply pumped from city artesian well , near Hotel Camagüey, into tank on roof; good and ample; build ing has modern water - closets and bath . Building was renovated during first intervention; needs some repairs (1907).

San Lázaro; public institution; home and hospital for aged poor. One mile west of town on Havana road, in suburb San Lázaro. Quadrangular building; one story; male and female wards on opposite sides of patio; cistern ; artesian well; windmill; baths and modern water - closets; a model institution. Has about 100 patients; could accommodate easily 300 or more.

Hospital of Colonia Española, southeast of city. A house near Casino Campestre; a two - story stone building with balconies, 60 by 60 feet, and has an azotea. A private hospital for Spaniards; 20 patients; could accommodate 100. A good isolated hospital for contagious diseases; cistern; well; modern water - closets: bad condition.

Convent of San Juan de Dios, in plaza of and adjoining church of same name. Two stories; patio around cistern; used by Americans during first intervention. Was originally a hospital; now rented to poor people, and is in a very dilapidated and dirty condition ; would require great ex pense and labor to make necessary repairs ; cistern is dry and dirty; no conveniences."

Posted by Joaquin Estrada-Montalvan at 8:56 AM