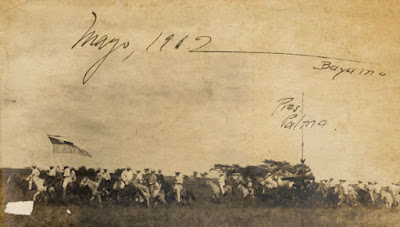 In 1902, Tomás Estrada Palma set foot on the island of Cuba for the first time in almost twenty-five years. José Martí’s successor as head of the Partido Revolucionario Cubano, Estrada Palma was living in exile in Central Valley, New York when he was elected Cuba ‘s first president in 1901. Once elected, he renounced his naturalized American citizenship and traveled to his homeland, landing in Gibara, Oriente on April 20, 1902. Estrada Palma traveled across Cuba for three weeks, getting reacquainted with the island and giving Cubans a chance to see in person the man they had elected as their first repúblican president. He reached Havana on May 11, 1902 and was inaugurated eight days later on May 20, 1902. This photograph depicts Estrada Palma’s caravan as he marched across Cuba. At the head of the group is a rider carrying the flag of Bayamo, Estrada Palma’s hometown and birthplace of Cuba’s struggles for independence. Estrada Palma rides in a black carriage at the center of the photograph. It is part of the Tomás Estrada Palma Collection of the Cuban Heritage Collection (CHC) of the University of Miami Libraries. This collection was donated to the CHC by Estrada Palma’s grandson, Tomás Douglas Estrada Palma, in 1995. 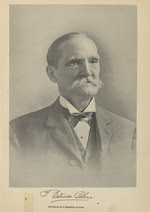 Posted by Joaquin Estrada-Montalvan at 7:05 AM