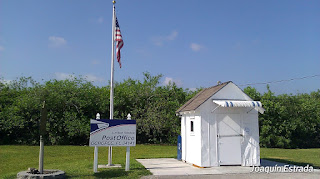 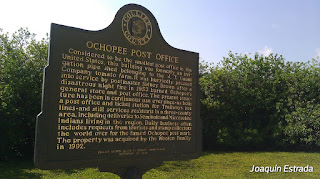 Considered to be the smallest post office in the United States, this building was formerly an irrigation pipe shed belonging to the J.T. Gaunt Company tomato farm. It was hurriedly pressed into service by postmaster Sidney Brown after a disastrous night fire in 1953 burned Ochopee's general store and post office. The present structure has been in continuous use ever since - as both a post office and ticket station for Trailways bus lines - and still services residents in a three-county area, including deliveries to Seminole and Miccosukee Indians living in the region. Daily business often includes requests from tourists and stamp collectors the world over for the famed Ochopee post mark. The property was acquired by the Wooten Family in 1992.


Collier County Board of County Commissioners - September 27, 1984.
Posted by Joaquin Estrada-Montalvan at 7:05 AM