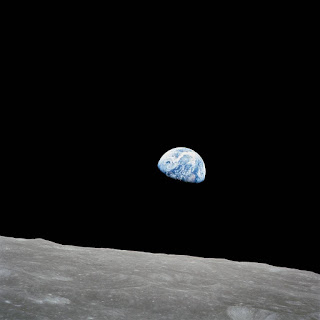 This week in 1968, the Apollo 8 spacecraft became the first crewed mission to orbit the Moon. Astronauts Frank Borman, Bill Anders and Jim Lovell entered lunar orbit on Dec. 24 and held a live broadcast, showing pictures of Earth and the Moon as seen from the spacecraft and reading from the book of Genesis. The mission became famous for capturing this iconic “Earthrise” photograph, snapped by Anders as the spacecraft was in the process of rotating. The photo shows Earth rising over the horizon of the Moon and is thought to have sparked the environmental movement. The Apollo 8 mission concluded when the crew splashed down in the Pacific Ocean on December 27. (For more pictures like this one and to connect to NASA’s history, visit the Marshall History Program’s webpage. (NASA) 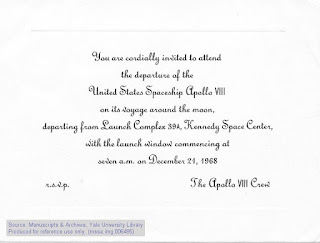 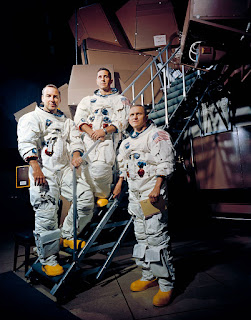 Astronauts James (Jim) Lovell, Frank Borman, and William (Bill) Anders pose for a portrait in their space suits on November 22, 1968, just less than a month before they would orbit the Moon. Credits: NASA.
------------- 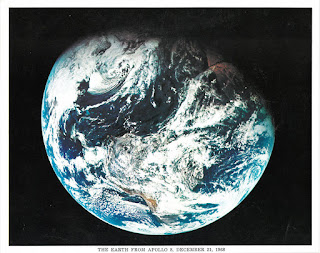 High altitude view of Earth as photographed from the Apollo 8 spacecraft during its translunar journey to the Moon. Visible is nearly the entire Western Hemisphere, from the mouth of the St. Lawrence River, including nearby Newfoundland to Tierra Del Fuego at the southern tip of South America. Central America is clearly outlined. Nearly all of South America is covered by clouds, except the high Andes Mountain chain along the west coast. A small portion of the bulge of west Africa shows along the sunset terminator. Credits: NASA. 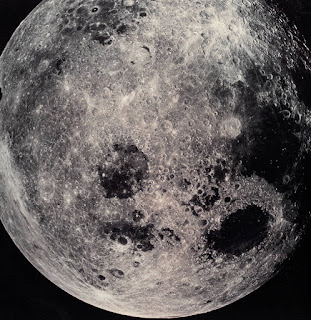 Photo taken from Apollo 8 during the 1968 mission on their first approach to the Moon. Credits: NASA
Posted by Joaquin Estrada-Montalvan at 7:07 AM