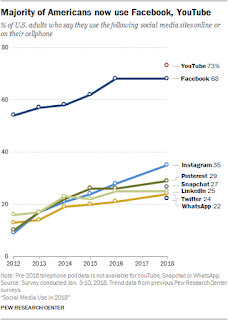 1. Around two-thirds of U.S. adults (68%) use Facebook, according to a survey conducted in January 2018. That’s unchanged from April 2016, the last time the Center asked, but up from 54% of adults in August 2012. With the exception of YouTube – the video-sharing platform used by 73% of adults – no other major social media platform comes close to Facebook in terms of usage. Around a third of Americans say they use Instagram (35%) while smaller shares say they use Pinterest, Snapchat, LinkedIn, Twitter and WhatsApp.

2. Facebook is popular among all demographic groups, though some groups are more likely to use it than others. Nearly three-quarters of women in the U.S. (74%) use the platform, compared with 62% of men. There are differences by community type and education level, too: People in urban areas are more likely than those in suburban or rural areas to use Facebook, as are those with a college degree when compared with people who have lower levels of education. Around eight-in-ten (81%) of those ages 18 to 29 use Facebook; that’s about double the share among those 65 and older (41%). However, the share of older Americans who use the platform has doubled since August 2012, when just 20% of those 65 and older said they used it. (Read full text at Pew Research Center's website)
Posted by Joaquin Estrada-Montalvan at 7:10 AM