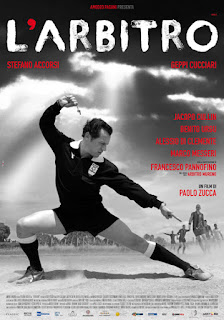 All I know about life I learned from football (Albert Camus), is the opening sentence in the newcomer Paolo Zucca’s unusual, original and grotesque movie that has captivated the critics at the Venice Film Festival. For once the audience agrees, because the director - helped by expert screenwriter Barbara Alberti - builds an hour and a half narration without the slightest drop of tone. L’arbitro (The referee) depicts two parallel stories: one about an experienced referee who wants to referee the European Championship’s final and for this purpose, he seeks to please one of FIFA’s managers n charge of selecting referees for official matches; the other is about two sardinian teams fighting for supremacy in the 3rd league while having to deal with a rather unfair referee. In the end the two stories merge: the international referee is sent to Sardinia as a punishment to referee the decisive match between the two rival teams. He will unintentionally score the decider and will be carried in triumph along the streets of the village.

L’arbitro (The referee)‘s photography is an intense black and white, telling Sardinia by pictures, customs and traditions, tribal challenges, struggling love stories, using football as a catalyst of passions and rivalries. The general tone is comic - grotesque, but not lacking realism when the director emphasizes the difference between those who play with passion and those who make sport the reason for living.

The characters are well played by very convincing actors: Stefano Accorsi is back, his handsome physique is in utter contrast with his role of arrogant referee, who is willing to do anything in order to make a career. Marco Messeri is a rfraudolent FIFA manager, Francesco Pannofino is a corrupt referee with a name that says it all (Mureno), Benito Urgu is the blind coach of the amateur team, Geppi Cucciari is the coach’s daughter, in love with Jacopo Cullin, Matzutzi from Argentina, leading the team at the top.

Paolo Zucca even quotes Fellini and the immortal sequence in Amarcord with Ciccio Ingrassia who climbs a tree and screams: I want a woman! Everything is identical to the original, only Cullin is not screaming, but makes it clear that if the coach’s daughter will not go to the movies with him, he won’t play. There are quotes from the Italian western genre, with some football sequences played as challenges between gangs of gunmen, filmed among those Sardinian canyons that once were spaghetti western’s favourite sets. The soundtrack is intriguing, based on pieces of waltz, tango and traditional songs such as Vivere e La Morena. Grotesque ideas, such as having the blind coach play a match and have a free kick (in the final scene he actually scores a spectacular goal), but also portraying tribal vendettas between teammates that in everyday life hate each other because of border conflicts. The punishment for the corrupt referee who finds himself managing a 3rd category match with an old woman who challenges his decisions hitting him with her umbrella is also a rather grotesque scene. Stefano Accorsi reminds us of Lando Buzzanca, who plays the same role in an eponymous film directed in 1974 by Luigi Filippo D'Amico, in some sequences on the pitch when he is enacting a weird dance. In certain situations, the use of dialect is acceptable, giving the scene more realism, but the use of subtitles would be more appropriate. This is a funny movie, which makes up for the lack of original screenplays and positive twists which are much needed in Italian cinema at the moment.