Salò or the 120 Days of Sodom (by Gordiano Lupi) 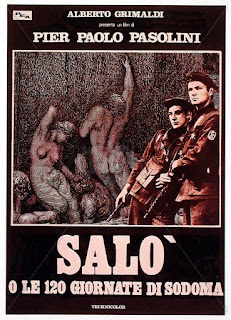 Salò or the 120 Days of Sodom is the most debatable and complex film by Pasolini. It is posthumous, but complete. Released in 1975, after writing Abiura alla Trilogia della vita (Abjuration of life’s trilogy) and a highly critical speech against authority, refusing the past as “lots of meaningless and ironic ruins”. In his abjuration Pasolini didn’t deny the light and merry eroticism in Decameron, in A Thousand and One Nights (Arabian Nights) and in The Canterbury Tales, but he thought that these kinds of works were a thing of the past.

It is easy to say that Salò is a film against authority and that Pasolini is interested in the historical reality as a symbol which is there to speak about the contemporary consumeristic mass society which is guilty of cancelling human identity. The plot is based on the novel The 120 Days of Sodom by the Marquis De Sade – one of the most abhorred and misunderstood philosophers in history – and is set in a castle during the Republic of Salò, while Fascist ideology was spreading. The main characters are rather disagreeable and repulsive: they are four Signori who order the capture of nine boys and nine girls as predestined victims. These people are first gathered in a castle during an atrocious Antinferno (Hell’s Vestibule): three days or so-called circles of obsessions, shit and blood respectively follow, becoming the structure of the film. During the three days some narrators entertain these four Signori, who give free rein to a series of sexual depravations, tortures and excesses.

Pasolini had never been so gloomy and tragic, without hope – except for a few love scenes and sentimental flashes – because everything in the film is excessive and shocking horror. The four main characters without morality are playing the game, while a pianist plays classical music, joining the story. There are many nudes, especially of men, repulsive scenes hard to watch (i.e. the shit circle), and tortures shot as if it was a film of pure exploitation. Many critics have consideredSalò – together with Salon Kitty and The Night Porter – the film that has contributed to give birth to the Nazi-erotic subgenre. Salò is not a collection of tortures and excesses which represents an end in itself, but the films belonging to the Nazi subgenre have imitated some of Pasolini’s extreme scenes. We consider Salon Kitty by Tinto Brass the true first film belonging to the Nazi-erotic subgenre, because of its plot and motivations. Salò shows a lot of sex, but no eroticism: sex is gloomy, tragic, imposed, victims cry, suffer and are subjected to rapes, as opposed to the Trilogia della Vita (Life’s Trilogy). “Nothing is more contagious than evil” says a torturer. “Don't you know we intend to kill you a thousand times? To the end of eternity, if there is an end to eternity have an end”, adds this gloomy character, quoting De Sale. The film goes on showing lessons of depravation, masturbations, suicides and political declarations, justifying the suffered violence: “Us Fascists are the only true anarchists. True anarchy is that of power”. A fake marriage has its wedding party composed by naked boys, but its consummation is stopped by the four men, with their desires and devoid of any feelings. “Without bloodshed, there is no forgiveness,” they say, playing on the confused quote between Baudelaire and Nietsche. One of the gloomiest scenes sees the boys and girls eating out of smelly bowls like dogs on the leash, while one of them gets hurt by nails, hidden in the polenta by a torturer. The victims’ faces are really sad, there are just blood, tears and no love.

The circle of shit is awful and desecrating, the victims are forced to eat excrements in very disturbing scenes. “Nothing goes to waste”, affirm the torturers. An awful wedding between one of the signori and a boy dressed like a bride, is the prelude to a disgusting excrement-based meal, ending with a kiss between two mouths dirty with shit. “The limitation of love is that you need an accomplice”, says another sir, after having himself urinated in his face. The beauty contest among boys and girls elects the best ass of the group, while the torturers are philosophizing: “Ambiguously accepting social standards while transgressing them”, adding that the pleasure of the torturer is similar, but it is more difficult to reiterate.

The circle of blood is a continuous excess, opening with an explicit act of homosexual sex and one of the boy’s erection but also with the continuous betrayals of the victims, who are trying to save their lives. Everything is vain. The destinies are already decided. A political gesture (a clenched fist) of a boy, who is found out with a servant (Ines Pellegrini), is the prelude to his killing and the macabre executions of the culprits start. Another symbol has been shown at the beginning, when a little boy was killed in Marzabotto, the venue of a historical Nazi-fascist massacre. “Oh Lord, why hast thou forsaken us?” cries a girl together with the prisoners, tied up in a tub full of excrements.

The four men watch the tortures and the executions, sitting at the window with binoculars, and taking their torturers’ roles in turn while they are getting excited with their favourites. In the meantime, the pianist who has just played until now kills herself, without interfering or saying a word. The horror has gone beyond the limit. In the final torture scenes the exploitation cinema genre clearly influences Pasolini’s poetics, among cut tongues, hangings, quartered vulvas, tore members, castrations, brandings, cut heads, rape, anal intercourses, absurd dancing in front of the dead. Someone has seen a light of hope in the conclusion (Italo Calvino, Corriere della Sera, 30/11/1975), because two collaborators turn on the radio, wondering about the name of the girl, and start to dance. It is a brief scene of normality surrounded by so much tragedy, a partial escape from hell, a change. Adelio Ferrero (Il cinema di Pier Paolo Pasolini, Marsilio 1994) interprets it in an opposite way, seeing in the gesture of the soldiers just the habit and the acceptance of a status quo, a way to forget the horror just closing the window and thinking about anything else.

Salò is a film that could have many interpretations, even the one concerning the author’s denial of his life and his cultural testament. We think it is not its right interpretation, because it is real attack on power, against the immoral arrogance of the leaders, who impose rules and there is no help for it. Pasolini uses an extreme text by De Sade in order to clash a global and consumeristic economic model, which he always denies with such a vital energy and a political passion, without giving up the fight. The poet expresses all his aversion to models of social homologation, which imply a cultural genocide and even an expropriation of the naturalness of bodies and faces. Pasolini expresses a painful and irritated break with the present in a radical, extremist and shocking poetical work. His poetry is disillusioned and graceless, self-destructive, scandalous and scandalising, unbearable and disturbing. There is no consolatory lyricism and over-refined flatteries, just squalor, painful submission and hell.

Salò is a decadent Decameron with no hope, characterised by the erotic stories of the narrators-whores. The four men represent limitless baseness, their culture feeds on Baudelaire, Proust, Nietzsche, Huysmans, but they only get excited with pornography, sex and blood. Salò is a macabre apologue of the impotence in power, a metaphor of State sadism, a transgression reduced in rites, full of anti-bourgeois anger. There is an inspiration and a contamination of cinema-dramatic models of Buñel, Brecht and Jancsó. The victims are tools and objects of abominable pleasures, some of them are hardened, others are conniving. They express helpless and alarmed faces, offended, raped, tortured, devastated, mortified and dejected bodies. Pasolini tells a gloomy, hopeless, claustrophobic, barbarous, immoral, tormented and tormenting story.

It is a violently traumatic film, which intends to shock the audience with unbearable images. It is a dark reading of the present, rather than an attack on past atrocities. It is an interesting work, which has to be studied without prejudices, to be seen only by a prepared audience.