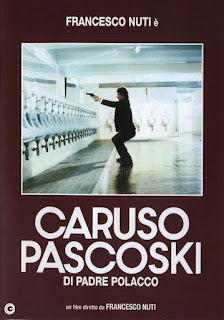 Caruso Pascoski (Nuti) is a young Florentine who has an oppressive mother and a father of Polish descent who never speaks, he only reads the newspaper and shakes his head. He’s been eternally engaged to Giulia (Burt), with whom he spent his childhood and adolescence and eventually ends up marrying her. It looks like a happy and loving marriage, at least on the surface; Caruso loves his wife and works as a psychoanalyst in the midst of many absurd cases. However the crisis comes as sudden as a summer storm, because one unfortunate day Giulia disappears and asks for a divorce, for no apparent reason. She does not love him anymore - so it seems - and got engaged to Caruso’s patient (Edward), whom he had called a latent homosexual. Caruso is left alone with his lawyer friend (Petrocelli), gets drunk, is often arrested by the senior sergeant (Novelli) and carries on working. Caruso seems to forget about Giulia, and gets involved with other women when Giulia suddenly decides to come back to him, right on the day in which the divorce should be finalized. Caruso and Giulia become lovers, they see each other in the strangest places, especially in the female toilets of a cinema. Eventually, the two go back to live together again, because Edward realizes he is actually gay (although he wants to have sex for the first time with Caruso): however, the threat that Julia could leave remains.

Francesco Nuti faces the theme of abandonment with lightness but also with touches of pure poetry. A love that lasts a lifetime is suddenly challenged by an unexpected variable. The music by Giovanni Nuti is wonderful; the beautiful, poignant theme of Giulia, but even the epochal unconventional and irreverent Puppe a pera (Boobs like pears) flow together as the credits run at the end of the film. The film is full of gags halfway between the absurd and the surreal that argue in favor of the definition of grotesque comedy. There are many elements of farce and slapstick comedy as well as cartoon style, that does neither clash with the most delicate sequences nor with the beautiful Florentine photography that captures picturesque locations. The film has the ability to move from the more rambling and crazy farcical register to an atmosphere of sophisticated, almost sentimental comedy. The beginning is memorable because Nuti makes a quick history of Italy from 1959 to the seventies through comic strokes, following the stages of his romance with Giulia. The songs from the sixties give way to the singer and songwriters Gino Paoli, Claudio Baglioni and Riccardo Cocciante; youngsters play the spin bottle game, his father reads the left-wing newspaper L’Unità, he reads the adult magazine Le Ore and masturbates in the bathroom despite his mother’s disapproval. The small kiss that Nuti would like to give everyone when he is drunk is awesome: especially when it comes to senior sergeant Novelli who arrests him while ironically imitating Ruggero Perugini’s video message addressed to the serial killer known as the Monster of Florence. Caruso’s patients are elements of slapstick comedy at its purest state, silent movies’ pieces: the fake Marilyn Monroe, the twins, the black man who throws himself out the window, the snoring fool. His meeting with the crazy bartender (Frosali) outside his lawyer’s office results in a series of remarkable comic gags. Even the lawyer’s jokes are funny: ‘Mortadella is communist, salami is socialist, ham is democratic ... finocchiona (a special type of Tuscan salami) is radical’. The dialogues with the patient who steals his wife from him, played by Ricky Tognazzi who had already appeared in Nuti’s Son contento (I am glad, 1983), are great comical pieces: ‘Husband, television and slippers: they all suck...’. The child with the toy gun who threatens him while he hits him with a shovel, but also the fake shooting at the supermarket are two effective elements inspired by comics. The film encompasses other highlights: the surreal slow motion bathroom scene in which he tries to grip the gun, the drinking challenge with the barman, the odd lovers he meets to forget his wife, the meetings in while dressed as a woman, the lovemaking in an elevator, the pen that does not write at the time of signing the divorce papers, the slapping scene in Piazza del Duomo between Caruso and Burt. One can’t forget to mention the gay scene in which Nuti enters the women's bathroom, announcing among various winks, ‘I’m a faggot, I’m a faggot ...’.

Clarissa Burt (Philadelphia, 1959) is an American model, who was discovered by Francesco Nuti and with whom she had a brief romantic relationship and helped her to launch her career in the world of cinema. She has recently become an Italian citizen and -unfortunately- we have seen her appearing in many reality shows since then. Ricky Tognazzi is very good and he shows it even in such an unrewarding role. The two character actors Novello Novelli and Carlo Monni are indeed very funny. The future film director -and in this case screenwriter- Giovanni Veronesi plays a cameo in the role of an intellectual who has his glasses smashed in the library by an angry Nuti.

Roberto Cozzuol of Italian Film 1960-1990, the essential Facebook group dedicated to Italian cinema, recalls: ‘Giovanni Veronesi tells of how the process of script writing took place in Los Angeles, where the group moved to a villa paid by producers to find inspiration. Nuti wanted to make an absolutely comical film, the most fun ever, and by incorporating too much farce in it he got torn apart by the critics who obviously condemned his ideas of an easy laugh. While Piccioli (the producer) wanted to set up auditions the female role, Nuti was convinced that Clarissa Burt (his girlfriend at the time) was already the best possible choice. Nuti did not object to the auditions but finally succeeded in imposing Burt, which turned out perfect for the part. Pascoski’s son (‘Paskoskino’ called in the credits) is actually Margherita Nuti, Nuti’s nephew, who now recalls how when she was a little girl all her classmates used to ask her to sign their backpacks with the name of ‘Pascoskino’! The kissing scene between Ricky Tognazzi and Clarissa Burt must have been quite curious, as Nuti (who had just got together with Clarissa) was jealous of her and watched, but also for the actress Simona Izzo (who had just got together with Ricky and was dubbing Clarissa in the movie) was jealous of Ricky and watched her as well... Francesco Nuti would eventually take back to the big screen the character of the psychoanalyst with Caruso, zero in condotta - Caruso, zero marks in behavior (2001), his last film as a director. This however had nothing to do with Caruso Pascoski but it was rather a mock sequel, a mix of different characters which resulted in total failure of both public and critics.

Review. Paolo Mereghetti (a one star), ‘This film is very pretentious, it’s cheap little work, with a bad sense of humour, irritating and vulgar. The Tuscan comedian shows that he’s in bad shape while Ricky Tognazzi is far better.’ What did Francesco Nuti ever do to Mereghetti to be treated so badly? Were we all idiots, us, the eighties’ youth, going crazy about Nuti’s cinema? Above all, we are still are completely crazy since we still look these movies up, watch them and attempt to review them?
A better review comes from Pino Farinotti that gives it two stars and says: ‘The comedy is, like Nuti’s previous ones, weighed down by the Tuscan comedian’s narcisism. However, many gags are effective. Ricky Tognazzi is able to extricate himself with unexpected skill from the folds of a thankless role.’

Morando Morandini (two stars from the critics, three from the audience) says: ‘Away from the Ponzi’s protective direction, Nuti focuses his film on the uncertainty of relationships and the mystery of women, a planet to be explored. He also focuses on visual gags and mixes tones with the fury of a neurotic and narcissist acting but runs out of steam.’ In any case, this film had a great success with the audience.

To learn more about and get an objective view of Francesco Nuti and his works, we recommend Francesco Nuti - the true story of a great talent by Matteo Norcini (Ibiskos).