(Miami Film Festival) The Rest I Make Up, A documentary about María Irene Fornes 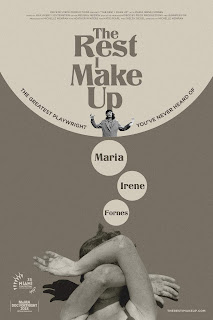 One of America’s greatest playwrights, María Irene Fornes was born in Havana, moved to the US in her teens, and rose to prominence in the 1960s Off-off Broadway scene with her wildly innovative, endlessly playful approach to language and form. She has won nine OBIEs, been nominated for a Pulitzer and transformed countless lives as an educator. Fornes was diagnosed with Alzheimer’s more than a decade ago, but, as this alluringly intimate documentary reveals, she retains her charisma and wonder.

---------------------------------------------
Fornes’s large body of work includes more than 35 original plays spanning 1961 to 2000. She directed the premieres of the vast majority of her own plays and also was at the helm of several productions of classics (Hedda Gabler, Uncle Vanya) and new works by emerging playwrights, often her playwriting students. Her pieces varied in length from brief one acts to full-length plays. Some works included songs, some included puppets or outrageous costuming. Fornes worked primarily in New York City, but traveled widely to direct and teach. (Read full text of María Irene Fornes, World Builder at American Theatre's website)
Posted by Joaquin Estrada-Montalvan at 8:27 AM