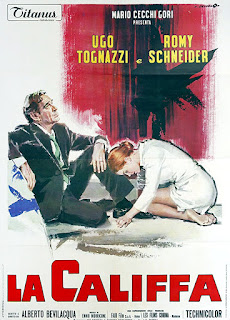 La califfa (The Lady Caliph) is Alberto Bevilacqua’s first film. It is based on the director’s third book, published in 1964, a huge bestseller that anticipated his 1966 Campiello Prize winning novel Questa specie di amore (This Kind of Love). The sensual Romy Schneider has the leading role as Irene Corsini, la califfa, the widow of a workman killed by the police. She is introduced with an intense long-sequence shot that will be repeated in the tragic final scene. Ugo Tognazzi plays the sympathetic Doberdò, an entrepreneur bewitched by the fierce working-class lady. For love’s sake he will try to be sympathetic towards the workers’ needs and to solve the problems in his factory.

La califfa is set in Parma, Bevilacqua’s birthplace, a city that the author will portray in short stories, novels, poems and films. Irene Corsini, a woman strengthened by her own sorrow, is the leader of a protest movement in Doberdò’s factory, but eventually she falls in love with the entrepreneur. Next to her, he discovers a new reality, and sees a more humane way to make business. However, he will not be able to convince his fellow industrialists, who will kill him in the final scene, and will throw his body by the side of the factory’s wall. It’s a new bloodshed for Irene, a new wound in her life.

Being on a rather low production budget meant that Bevilacqua was forced to film only the second half of his novel, and often had to use the same scenes for a number of dream sequences. Moreover, he also omitted some characters and focussed the action only on the protagonists. Many dialogues, some of the utmost importance to understand the relationship between Doberdò and Irene, were also dismissed. Even the final sequence is different from the book - that is, it’s more dramatic - as the novel ends with the entrepreneur’s death by natural causes. The film locations are Parma, Spoleto, Terni, Colleferro, and Cesano di Roma. Ennio Morricone’s soundtrack is amazing. It often features a somewhat western theme, as a comment of the scenes related to the Wild West duels or showdowns, so typical of that film genre. Roberto Gerardi’s soft pastel tone photography is excellent. At his first film direction, Bevilacqua is well acquainted with the long sequence shots, but exceedingly prone to the zooming technique - one of the evils of that filming era. However, his screenplay is poetic enough to support the hyperrealistic scenes of this metaphoric and didactic film. The actors are extraordinary: Ugo Tognazzi is at his best in embodying the entrepreneur, a former country boy who, because of love, changes his pragmatic approach to life by romantically challenging the establishment. Tognazzi is no stranger to the magnate or upper class member roles, but in this film Bevilacqua provides him with a number of poetic one-liners: ‘Today the power needs neither heroes nor lions. It only needs poets’, he says. And, talking about his poor youth: ‘I went away just not to see that damp stain over my head any more’. Romy Schneider is upsettingly beautiful in her astonishing close-ups during the police charge and the bloodshed riot scenes. Irene’s role – a strong woman, ready to run all risks – is particularly suitable for her own personality. Bevilacqua is very good at narrating the feminine soul and at composing unusual portraits of over-the-top women. Among the character actors Gigi Ballista is at ease playing the businessman, a role he will repeat over and over again in the Italian sexy comedies; Stefano Satta Flores plays a workman just for one sequence; Gigi Reder (the future Ragionier Filini of the Fantozzi film saga) plays a subservient waiter; Giancarlo Prete (the science fiction action film bodybuilder) plays the califfa’s exploited lover; Massimo Serato plays the magnate who commits suicide.

Bevilacqua portrays the Italian society at the end of the 60’s, with its aggressive tycoons, the closing of factories, the sit ins by workmen demanding more respect for their work. We see police charging, industrialists committing suicide after going bankrupt, protests in the squares. Along with the description of the social environments, we have a merciless analysis of the bourgeois marriage, with fading away passions and infidelity. This criticism doesn’t even spare the generational contrast between fathers and sons. ‘If a father and a son ran away together to reach a nonspecific goal, nothing would probably happen’, Tognazzi says. The ‘master’s speeches’ addressed to his workmen are intense, although a bit pompous and redundant, as well as the class struggle scenes, which are sometimes too stylized. The representation of the factory as a pagan divinity, where workers pay their daily homage before the ‘Production Altar’, is striking. To be remembered are some dreamlike sequences: the flower blocking the machinery of the factory, the Califfa locking the master in his own room, only to let him die alone with his millions… The erotic scenes are only suggestive, even though the two protagonists are credible and convincing. Romy Schneider’s toned body has a powerful screen presence in her full-figured nude scenes. Although marked by an exceedingly radical inspiration, this film stands as a good product of its own era and should be watched in the correct historical perspective. The rebel working-class lady and the entrepreneur share the same bravery, the same humble origin, the same faith in a project, and the same illusion of changing the world. However, the harsh reality will destroy their dreams.

Reviews. Morando Morandini (three stars from both critics and the audience): ‘The real surprise of this social comedy is Ugo Tognazzi’s outstanding versatility. He can master his reactions and tones admirably. Romy Schneider is less convincing as a working-class member. Nevertheless, this is the best product among the works of Bevilacqua from Parma’. This judgment is hard to accept, particularly for its conclusions, for the doubts on Schneider’s acting performance, and for its definition of a dramatic and hyperrealistic film like that as a comedy. Paolo Mereghetti (one stars) tears the film completely apart: ‘Bevilacqua’s first film, taken from his novel of the same title, is a portrait of a young lady, but it loses its way among commonplace and groundless references to the social tensions of the era’. Pino Farinotti gives the film three stars: despite the lack of critical analysis, his value judgment is largely sharable.