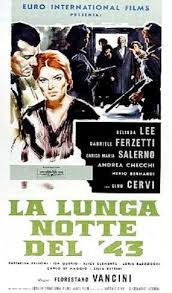 Florestano Vancini (1926-2008) made a fine debut as a director with a movie based on one of the “Five stories from Ferrara” (Cinque storie ferraresi) written by Giorgio Bassani and winner of the Strega literary prize in 1956. Vancini sets the dramatic story a reminder of the last episodes of fascist slaughters in a foggy and eerie Ferrara. It is a story of love and death, an existential drama set neorealistically among the ruins of a lost war, as Dr Pino Barillari (E.M. Salerno), a victim of syphillis, watches the days go by and resignedly accepts his beautiful wife’s (B. Lee) liaison with Franco Villani (G. Ferzetti). At the heart of the film is the fascist repression ordered by the provincial party secretary Sciagura (Calamity) (G. Cervi). He orders that ten or so antifascist scapegoats be shot so as to avenge the fascist consul’s murder that Sciagura himself had plotted to get rid of him. Among the victims is the lawyer Villani, Franco’s father; this tragic event persuades Franco to leave Italy. Years go by, it is now 1960 and Ferrara has changed. Franco comes back with his French wife and children to see the memorial stone on the spot where his father was shot. He goes to the chemist’s shop and he learns that the doctor has died and that his wife left Ferrara, but he also meets Sciagura and he greets him as if nothing had happened. “I believe he never did anything wrong”, he says to his wife in the last sad scene. This is a savage indictment by Vancini seventeen years after the tragic event of the many fascists responsible for murders and deaths who have not been punished, who are still among us, masquerading as respectable people.

There are no positive characters in Vancini’s neorealistic drama. Franco chooses to run away and does not want to know the name of his father’s murderer. Pino watches everything from his window but he does not report anything and his coward silence makes him an accomplice of the fascists. Anna is the best character in the film because she would like her husband to confess, but she too is a traitor who leaves her husband to his lonely death. The film is half melodrama and half war report, in a work that conveys the neorealistic and intimate effects of Vancini’s filming in his home town of Ferrara, creating a gem of fiction for the audience and critics alike. The whole story is based on a true episode – a fascist reprisal- and, for this reason, the making of the film ran into many difficulties. It came out with a 16 certificate because of some scenes between Belinda Lee (Gualtiero Jacopetti’s wife who died in her youth) and Gabriele Ferzetti that were considered rather explicit. Vancini was always doubtful about the real reason for this prohibition and always declared that it was imposed in order to obstruct the screening of a film that was so thoroughly antifascist.

The Long Night of 1943 was shot in the Rome studios and in a night-time Ferrara with excellent photography and a wealth of authentic detail. It features a superb cast, above all Enrico Maria Salerno as a man racked with remorse and consumed by his illness and Belinda Lee in a very intense performance of a woman worn out by her own mistakes. Ferzetti and Cervi show great professional skill and are both perfect while playing, respectively the part of the coward and that of the persecutor in a double-breasted suit. Raffaella Carrà plays a small part and appears in the credits under her real name (Pelloni). The music is excellent and boasts some of the songs written by another Ferrara man, Oscar Carboni, and, at the end, the fascist anthem ‘Vincere’ performed by Michele Montanari.

Posted by Joaquin Estrada-Montalvan at 7:10 AM