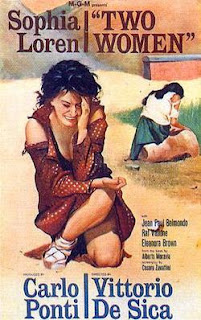 Two Women is a great film and based on the intense and intriguing novel by Alberto Moravia. The book is written in first person and the narrator is Cesira, a humble woman and mother of a teenage girl, Rosita. After 1943 Cesira decides to escape from Rome to her native village, Sant’Eufemia, in the mountains of Ciociaria. There she meets and falls in love with Michele but their happiness is short lived: mother and daughter are raped in a church by a gang of Moroccan soldiers, while Michele is killed by the Germans.

Sophia Loren plays the ultimate role in her acting career - which she will play again in a Dino Risi’s tv adaptation after thirty years – even if producer Carlo Ponti would have actually liked Anna Magnani and Sophia cast in the women’s roles. Once it was obvious Anna Magnani wouldn’t be a member of the cast, Vittorio De Sica decided to make Sophia Loren look older and cast twelve-year-old Eleonora Brown in the role of the daughter. That was a brilliant idea, because the most memorable thing about the film is the mater dolorosa (grieving mother) interpretation by Sophia Loren after the rape scene, who is broken-hearted for her daughter’s fate. Sophia won an Academy Award as best actress in a leading role and gave a genuine insight of the novel in the film.

Eleonora Brown’s acting is not the finest, but at the end of the day she has to play the role of the daughter created by Moravia: a saint that turns into a whore after being raped, a little girl that hasn’t met a man yet, who was devout but is now transformed by the war.

Jean-Paul Belmondo is an intellectual in love, even if the character of the novel is portrayed a little bit differently.

The film ignores many things which are really important in the novel: the selfishness of the farmers, the ignorance of the poor people, the sloth of the Italians, who are less interested in the war’s winner but rather in its end, the living conditions of the poor, the famine, the black market… The film is characterised by a lyric melodrama, a screenplay that mixes Neorealism and a romanticized reality, some sentimental moments, but most of all possesses a strong female connotation given by the mother-daughter relationship. The English and Spanish titles (Two Women/Dos Mujeres) are not misleading. The people’s anger towards those who involve people in an unwelcome war, as well the will of the people to start again are obvious.

De Sica and Zavattini use Moravia’s topic to expose the horrors of war, to underline how men can change in this situation by acting in horrible ways. Fascists, Germans, deserters, English people, farmers and evacuees are all part of a suffering humans who are dominated and broken by major events beyond their control.

The black and white photography is by Gabor Pogany, the sets are build in detail in the mountains of Ciociaria. The music is by Trovajoli and the editing by Novelli.

The most extraordinary scene is the rape in the church, full of suspense and horror in the women’s eyes. Another scene from the novel is the one showing a crazy woman walking among the rubble, offering her breast to what would appear to be her dead child. Moravia, De Sica and Zavattini touch on a sore point, saying Italians are masters of nothing anymore, except for women’s breast milk.

Two Women tells a sad past that many people want to forget in 1960, but this is the right time to digest such a story. The film is more lyric than the novel, but it shows Italy’s hopelessness after the 1943 armistice, a country shocked by the civil war and the bombs. The remake made thirty years later was actually pointless.

Posted by Joaquin Estrada-Montalvan at 7:30 AM