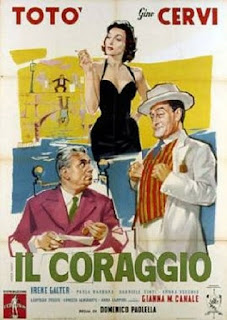 The Courage is a classic comedy adapted from a play by Augusto Novelli, revised by Totò himself, who also produced this film which was not, however, very successful.

Domenico Paolella (Foggia 1915 - Rome, 2002) was a director who survived the fall of fascism; he began as an assistant to Carmine Gallone (Scipio Africanus), who debuted at the age of 24 with Gli ultimi della strada (The last of the road) (1939), an unusual film - albeit propagandistic - about Neapolitan street urchins. Paolella was a maker of interesting short films, a war correspondent from the Soviet front, and a newsreel director of INCOM (1946-1951).

His name remains linked to comedies and musicals, especially in the various films starring Totò. He died in 2002, but he directed his last films in 1979: “Gardenia”, “Either beautiful or ugly, everyone laughs”, “No, it is not out of jealousy” and one episode of “Three under the sheet” by Paolo Dominici. He is remembered for his work in the nineties as the author of stories and screenplays for several films by Aldo Lado, Stelvio Massi, Lamberto Bava and Sergio Sollima. Among his best titles areThe Nuns of Saint Archangel (1972) and Story of a Cloistered Nun (1973), forerunners of the “nun movie”, though he made artistically good historical movies. Many films about Maciste, Goliath and Hercules - the 1960s Italian sword and sandal movies - bear his signature.

The Courage is a well-structured, well-photographed comedy, with an elaborate and flawless screenplay, filmed almost entirely indoors (at Tirrenia – Pisorno studios) and well edited. Gino Cervi is the “Commendatore” Paoloni, saviour of the crafty Gennaro Vaccariello who, after falling into the waters of the Tevere, takes advantage of the situation to keep himself - and his large family – maintained by his benefactor. There are many misunderstandings, as in any good farce. Cervi is excellent in the role of the gruff good-natured man, as is Toto in the part of the poor man who invents ways of surviving from day to day. Totò is refrained from from being too flamboyant by Paolella and a whole team of scriptwriters. He limits his double-meaning gags to an exchange with Gianna Maria Canale (the Commendatore’s lover) when he pretends to be a wealthy Argentine who wants to marry her: "Of course, my dear, a “Vaquerillos” more or a “Vaquerillos” less: what difference does it make?". An obligatory fifties-style love story features as a subplot of the film. The extremely young Irene Galter and Gabriele Tinti (the latter will go on to marry Laura Gemser and become a big name in genre films) play the usual story of the young heiress who falls in love with the poor but beautiful boy. Totò becomes Gino Cervi’s great friend, uncovering a scam against him hatched by Leopoldo Triste (the untrustworthy administrator) and freeing him from the kept woman (Canale) who had been taking large amounts of money from the corporate coffers. We would point out that during the first lines of the film Gino Cervi claims to be resident in via Marcello Marchesi, the name of one of the screenwriters of the film.

Domenico Paolella was a fairly accomplished director at the time but, despite this, the contemporary Luigi Chiarini (1956) wrote that he was "a young director who clung to Totò to achieve success" and ended up slating the movie by calling it "colourless and dull." The fault which Chiarini lays at the director’s door is that of using an old theatrical script, Petrolini’s old favourite, just to create a farce, without saying anything new. The critic Paolo Mereghetti grants the film two stars: "A kind of surreal apology ... the premise’s originality quickly unravels into a sort of moralistic lecture ... the cardinal’s imitation on the phone with the funnel is unforgettable."

Morando Morandini (two and a half stars from the critics, three from the public) is more indulgent: "A witty and precise satire. The pace slowed in the second half, that is carried almost solely by Toto."

Pino Farinotti confirms his verdict of three stars, without giving any reason. In our opinion, The Courage is a film that shows Totò’s true comic talents, since it is based on a solid screenplay and directed by a director with a steady hand who is never dominated by the actor. Totò also worked as an author in the drafting of the plot and creates a very theatrical comedy from the one-act play by Augusto Novelli. There are wonderful monologues about the poor who bring children into the world because they cannot afford other pastimes, but also about skeletons in the closet, the unspeakable secrets that everyone has, and that may always be used as a threat. The caricature of the faux-riche South American who calls his little Susy a Plum is hilarious. The combination of sex and politics, but also the trilogy of business - sex - politics, was already much in evidence in the fifties. It is a script which is still relevant today, if the few time-specific elements are removed.