Ambassador Nikki Haley:"What the General Assembly is doing today – what it does every year at this time – is political theatre" 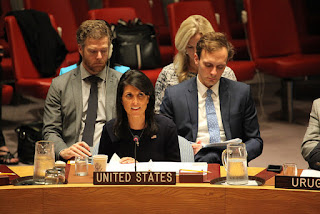 Remarks at a UN General Assembly Meeting on Cuba

For over 55 years, the Cuban regime has used this debate in the United Nations General Assembly as a shiny object to distract the world’s attention from the destruction it has inflicted on its own people and on others in the Western Hemisphere.

Even during the Cuban missile crisis, when the Castro dictatorship allowed the Soviet Union to secretly install nuclear missiles in Cuba, the Cuban regime and its Soviet allies claimed that the real threat to peace wasn’t the missiles aimed at America. The real threat, they said, was the United States’ discovery of these missiles. At the time, the U.S. Ambassador to the United Nations, Adlai Stevenson, identified the Cuban regime’s habit of pointing fingers anywhere but at itself. He said, “This is the first time…I have ever heard it said that the crime is not the burglar but the discovery of the burglar – and that the threat is not the clandestine missiles in Cuba but their discovery and the limited measures taken to quarantine further infection.”

Today, the crime is the Cuban government’s continued repression of its people and failure to meet even the minimum requirements of a free and just society. Our response has been to stand with the Cuban people and their right to determine their own future. For this, each year, this Assembly’s time is wasted considering this resolution. And the United States is subjected to all manner of ridiculous claims – anything to deflect attention from the regime that is actually responsible for the suffering of the Cuban people. But the United States will not be distracted. We will not lose sight of what stands between the Cuban people and the free and democratic future that is their right.

For that reason, and for the 25th time in 26 years, the United States will vote against this resolution.

One year ago, the United States abstained when voting on the same resolution. The reason given was that the continuation of the embargo was not isolating Cuba but was in fact isolating the United States. It is true that we had been left nearly alone in opposition to this annual resolution. No doubt there will be some here who do not understand how we can take such opposite positions, separated by just 12 months. They will wonder how we could passively accept this resolution last year and energetically oppose it this year.

To those who are confused as to where the United States stands, let me be clear: as is their right under our constitution, the American people have spoken. They have chosen a new president, and he has chosen a new ambassador to the United Nations.

As long as the Cuban people continue to be deprived of their human rights and fundamental freedoms – as long as the proceeds from trade with Cuba go to prop up the dictatorial regime responsible for denying those rights – the United States does not fear isolation in this chamber or anywhere else. Our principles are not up for a vote. They are enshrined in our Constitution. They also happen to be enshrined in the Charter of the United Nations. As long as we are members of the United Nations, we will stand for respect for human rights and fundamental freedoms that the Member States of this body have pledged to protect, even if we have to stand alone.

The resolution before us aims to end the United States’ “economic, commercial, and financial embargo” against Cuba. But let’s be honest about what we really see going on here. This assembly does not have the power to end the U.S. embargo. It is based in U.S. law, which only the United States Congress can change. No, what the General Assembly is doing today – what it does every year at this time – is political theatre.

The Cuban regime is sending the warped message to the world that the sad state of its economy, the oppression of its people, and the export of its destructive ideology is not its fault. (read full text)
Posted by Joaquin Estrada-Montalvan at 7:00 AM