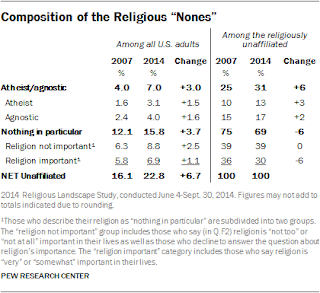 Estimating the number of atheists in the U.S. is complicated. Some adults who describe themselves as atheists also say they believe in God or a universal spirit. At the same time, some people who identify with a religion (e.g., say they are Protestant, Catholic or Jewish) also say they do not believe in God.

But one thing is for sure: Along with the rise of religiously unaffiliated Americans (many of whom believe in God), there has been a corresponding increase in the number of atheists. Here are a few facts about this group and their beliefs: (Read full text at Pew Research Center's website)
Posted by Joaquin Estrada-Montalvan at 8:26 AM