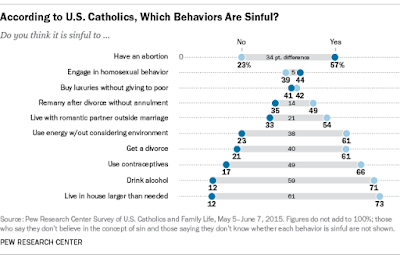 (Pew Research Center) Catholics are divided on homosexual behavior, with 44% saying it is sinful and 39% saying it is not – a figure that rises to 51% among Catholic adults under age 30. And majorities of Catholics say that living with a romantic partner outside marriage (54%) and getting a divorce (61%) are not sinful. About half (49%) say remarrying after a divorce without first obtaining an annulment is not a sin.

In addition, fully two-thirds of U.S. Catholics (66%) say using artificial birth control is not a sin. Even 57% of the most devout Catholics – those who report attending Mass at least weekly – say using contraceptives is not wrong.

Those who attend Mass weekly or more are divided over the sinfulness of cohabitation (46% say it is sinful, 45% say it is not). (Read full report at Pew Research Center's website)
Posted by Joaquin Estrada-Montalvan at 8:52 AM