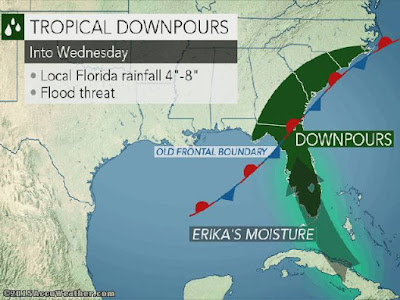 MIAMI (CBSMiami) – Erika has dissipated as a tropical cyclone and all Tropical storm watches and warnings are being discontinued.

The storm has dissipated due to wind shear.

The remnants are moving toward the west-northwest near 22 mph. This general motion should continue for the next 24 hours or so, with the remnants expected to move near the coast of eastern and central Cuba Saturday and Saturday night and into the southeastern Gulf of Mexico on Sunday.

Maximum sustained winds are near 35 mph with higher gusts.

However, the system could re-strengthen as it moves north through the eastern Gulf of Mexico early next week.

The biggest threat for South Florida will be heavy rain and possible flooding. However, if the remnants continue to move to the west then our rainfall totals will be considerably less. (read more)
Posted by Joaquin Estrada-Montalvan at 10:02 AM