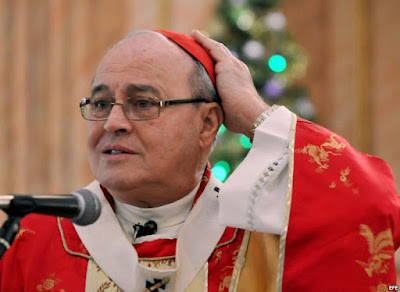 Over the summer [2014], the pope wrote forceful, confidential letters to Obama and Raúl Castro, imploring the two leaders "to resolve humanitarian questions of common interest, including the situation of certain prisoners, in order to initiate a new phase in relations." To safeguard his communications, the pope sent both letters via papal courier to Havana—with instructions to Cardinal Ortega to personally deliver the message into the president's hands. Ortega then sent his top aide to Washington to advance his clandestine diplomatic mission. But arranging a secret face-to-face meeting with the president of the United States was easier said than done. Alerted to the problem, Cardinal McCarrick conferred with White House officials, who enlisted his help as a secret back-channel go-between. In early August, McCarrick traveled to Cuba carrying a note from Obama that asked Ortega to entrust McCarrick with delivering the pope's letter to the White House. But Ortega's papal instructions were to deliver the message himself. McCarrick left Cuba empty-handed.

Back in Washington, McCarrick worked with McDonough to arrange a secret meeting for Ortega with the president. On the morning of August 18, Ortega gave a talk at Georgetown University—providing a cover story for his presence in Washington—and then quietly went to the White House. (To make sure the meeting did not leak, US officials kept Ortega's name off the White House visitor logs.) Meeting with the president on the patio adjacent to the Rose Garden, Ortega finally completed his mission of delivering the pope's sensitive communication, in which he offered to "help in any way."

It was a convoluted process, but an unprecedented gesture. "We haven't received communications like this from the pope that I'm aware of other than this instance," a senior US official recalls. "And that gave, I think, greater impetus and momentum for us to move forward." (read full text Inside the Crazy Backchannel Negotiations That Revolutionized Our Relationship With Cuba)
Posted by Joaquin Estrada-Montalvan at 5:52 PM