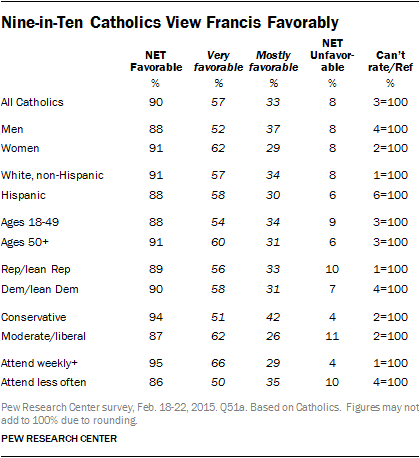 
Among U.S. General Public, Seven-in-Ten Rate Francis FavorablyAs they have gotten to know more about him, non-Catholics also have grown more admiring of Pope Francis. Among U.S. adults overall (Catholic and non-Catholic), seven-in-ten see the pope favorably, up 13 points since the days immediately following his election in March 2013. The share of Americans who see Francis unfavorably has remained relatively steady, and is now 15%. Fewer U.S. adults now say they have no opinion or don’t know enough to rate the pope (15%) than said the same in March 2013 (29%).

Pope’s Popularity Broad BasedThe latest Pew Research Center survey, conducted Feb. 18-22, 2015, on landlines and cellphones among a national sample of 1,504 adults, finds that the pope’s popularity is very broad based. He is most widely admired by Catholics, but six-in-ten Protestants and two-thirds of the religiously unaffiliated also view him favorably. He is viewed more favorably by Americans over the age of 65 than among those under 50, but even those in the latter category express mostly positive opinions about Pope Francis. Both men and women give Francis a positive rating, and Republicans and Democrats are united in their esteem for him. (Read full report)
Posted by Joaquin Estrada-Montalvan at 7:27 AM