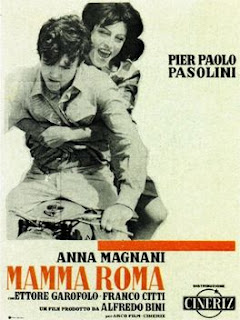 This is Pasolini’s second film as a director and adds an important piece to his journey through Rome’s suburbs and their suffering inhabitants. Accattone-Tramp (1961) shows the world of the urban underclass of the Capital as seen from the male’s perspective, with a stunning Franco Citti, sublime interpreter of one of Pasolini’s typical characters: the male prostitute. Pasolini continues the film adaptation of his literary work (Ragazzi di vita-Hustlers The ragazzi, Una vita violenta-A violent life, Il sogno d’una cosa-The dream of a thing, Poesia in forma di rosa-Poetry in the shape of a rose…), defining an open discourse by scripts such as La notte brava - The wild night (1959), by Mauro Bolognini, taken straight from Ragazzi di vita. Accattone tells the boys’ daily life in the Roman suburbs, between fights, sleepless nights, stunts, days spent at the osteria, petty theft and prostitution. The Borgata Gordiani is set in the foreground by skilled camera movements, tracking shots, poetic views, close-ups and wonderful sequence shots. Mamma Roma enjoys the same suburban setting of Accattone, but the protagonist is a woman, Anna Magnani, in the role of a Roman prostitute who wants to change her life to devote herself to her son Ettore. Sergio Citti is essential, acting as interpreter as well as consultant for the dialogues in Roman dialect, played by amateur actors, apart from the great Magnani. The themes dear to Pasolini are those that accompany all his artistic life: the marginalized, the underclass confined to a ghetto, lacking communication with other social classes, the underdog’s defeat, the inability to free oneself from a fate of suffering. Despite Anna Magnani’s different view of the world from Pasolini’s she gives a memorable performance. Her Mamma Roma is a courageous mother, who is worried about the fate of a rebellious son, a prey to the storms of adolescence, who reciprocates her love but doesn’t know how to show it to her. My mother? What should I care for my mother? Basically I think I love her, because if she died I'd start crying, he confesses to Bruna, the girl who makes a man out of him.

Summary of the plot: Mamma Roma (Magnani) decides to give up life as a prostitute when Carmine (Citti), her pimp, gets married, setting her free from any obligation towards him. The woman decides to devote herself body and soul to her son, Ettore (Garofalo), who knows nothing about her her job and grew up in nearby Guidonia. Mamma Roma begins to sell fruits and vegetables; she moves into an apartment at the outskirts of Rome, takes care of the child, tries to guide him in his choices of girls and tries to find him a job. She doesn’t want the boy to end up as she did, buried in the outskirts of Rome, but she dreams a peaceful future, with a respectable job for him. Suddenly, the pimp is back searching for Mamma Roma and makes her walk the streets again signaling both that the past that cannot be erased and the inevitability of fate. Ettore learns from Bruna what her mother’s true profession was, and as a reaction, he begins to commit crimes; he is eventually arrested after stealing a radio from a hospital patient. The finale is rather melodramatic: the boy dies in prison, tied to a bed and put in restraint, fallen prey to a feverish delirium. The movie is dedicated to the art historian Roberto Longhi and some scenic representations are pictorial, with the help of Flavio Mogherini, a - future director raised in the ‘Pasolinian’ style school of film making. The finale, with the kid who dies tied to the prison bed, recalls a one of most poignant of Mantegna's paintings, the Dead Christ. Carlo Rustichelli’s soundtrack is based on Antonio Vivaldi’s symphonies and accompanies poetic gloomy black and white shots. Violino tzigano - Gypsy violin, from time to time, interrupts the baroque music with some notes of popular music. The pace is slow, rhythmic, between sequence shots of the suburbs, panorama shootings, and dialogues in Roman dialect. It’s pure cinema: to see and follow the walks through Rome-by-night and following a logorrheic Mamma Roma telling episodes of her life mixing fantasy and reality is a feast for the eyes. Pasolini narrates by images a suffering humanity dreaming of an impossible redemption, resigned to an unhappy fate. The director makes a great figurative work and directs an extraordinary Anna Magnani who plays in the middle of a group of amateur actors in a very skillful way. Pasolini is keen to unravel the complex relationship between mother and son, according to psychoanalytical standards, describing the difficulty of a teenager to express his love for his mother. A theme dear to the poet, who was very close to his mother, even though their love was proletarian rather than bourgeois. Poems such as Ballata delle madri - Ballad of mothers e Supplica a mia madre - Begging my mother, in the poetry collection Poesia in forma di rosa - Poetry in the shape of a rose, follow the same theme. The sentimental education of a teenager is another topic dear to Pasolini, who includes it in the film by using the character of Bruna, the girl who introduces Ettore to the mysteries of sex. The faces of the urban underclass, the Ragazzi di vita-Hustlers, who interest Pasolini so much, photographed in their natural expressions and their daily suffering are never missing though. The director lingers on football dirty pitches, made up by the kids of the township, with the goals marked by sweaters and jackets, symbol of a way of playing typical of the Sixties. The relationships among prostitutes are marked by a spirit of friendship and fellowship are foregrounded. Mamma Roma’s statements such as Then whose fault is it Had we had the means, then we would have been all good people, weigh like stones, even if the director does not interfere with the images, never giving a moral or political judgment, but simply photographing reality. The finale is fantastic: as realistic as if taken out of the book Cuore – Heart – way too melodramatic, that is – but it is also true that the representation of the maternal pain and the son’s suffering is dramatic and moving. Being in jail is not water under the bridge, but it is a pain that lingers endlessly. The film’s ends focusses on the mother's despair: the camera stops briefly on that suffering face, a Madonna torn apart by her son's death, and without fading or unnecessary delays, gives way to the word The End on a white background.

Accattone and Mamma Roma’s genre cannot be clearly defined: these are literary works, from which the entire director’s poetry flows. If I could give a personal definition, without sounding blasphemous, I would speak of neorealism aided by a hint of Pascoli and De Amicis melodrama, two authors very dear to Pasolini.

Novice Ettore Garofalo was discovered by Pasolini while working as a waiter in a tavern, and in some sequences of the film we see him at work in his real job, when he is hired to serve at the tables of a restaurant. The writer Paolo Volponi, one of Pasolini’s friend, plays the priest to whom Mamma Roma asks for help to find a job for his son. The exteriors in the film were shot on the outskirts of Rome, at the Palazzo dei Ferrovieri in Casal Bertone, the village of INA, Casa Quadraro, Parco degli Acquedotti and Tor Marancia. Other scenes were shot in Frascati, Guidonia and Subiaco. We often notice in the background the Basilica of St. John Bosco’s dome, as well as the shanty towns where poor people actually live. With a little trick, Pasolini manages to combine scripted and spontaneous dialogue. Anna Magnani in fact rarely acts live with an amateur actor in a scene: the dialogue is cleverly edited using close-ups.

Paolo Mereghetti (three and a half stars): “The theme of a proletarian unconsciousness - or of a different consciousness - is at the centre of Pasolini’s second movie, where the director ennobles his characters with references to Renaissance painting (Dead Christ by Mantegna) , and reaches the top of pathos without shedding a tear: Mamma Roma represents a sore but indestructible femininity, while Ettore, skeptical and prematurely disappointed by life, is Accattone’s ideal brother, without being a dull replica of him. Magnani delivers one of her best performances despite the fact that Pasolini and her didn’t see eye to eye (he accused her of wanting to give the character petty-bourgeois traits).

Morando Morandini (three and a half stars from the critic, three stars from the audience): “The experiment of merging the acting of Anna Magnani with the Ragazzi di vita-Hustlers is partially successful, but despite imbalances, excesses and dumb zones, the film has moments of engaging stylistic power”.

Three stars from Pino Farinotti, who doesn’t explain his reasons.

Our opinion, as Pasolinians, is that the film deserves four stars: we cannot find flaws in an effective film, which combines psychological drama with scenes of everyday life, spontaneous recitation and a technical approach, a screenplay free of defects and a realistic dialogue.