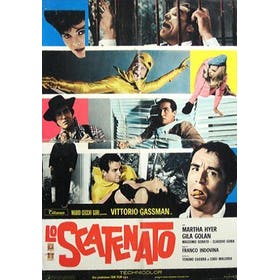 Catch as Catch Can

Catch as Catch Can is one of the six films directed by Franco Indovina, born in Palermo (1932-1972). He has been Visconti’s theatre assistant, Antonioni’s, Rosi’s and De Sica’s assistant director, and has also been married to Princess Soraya’s, the former empress of Persia, whom he met during the production of his first film, the episode "Latin Lover", part of The Three Faces (1964). Indovina died when his creativity was at the top, being victim of a serious plane crash at Punta Raisi near Palermo airport, during which 115 persons lost their lives. The actress Lorenza Indovina is his daughter. Indovina made another four films: Menage Italian Style (1965), "The Oldest Profession" (episode The Prehistoric Era (1967), The Voyeur (1970) and Tre nel Mille (1971) and, as Roberto Poppi said: “he is a director whose characteristic is love for satire and grotesque”.

Lo Scatenato is a very original film, atypical in the Italian production of the Sixties and positively feels the effects of Tonino Guerra’s and Luigi Malerba’s original writing. Bob Chiaromonte (Gassman) is an actor who works in advertising and he goes mad because he feels harassed by animals. A dog piddles on his leg, a bull makes him fall into a river, some mice chew on a rope which held him hanging from an helicopter; he’s being tormented by birds defecating on him. Bob refuses to work in adverts with animals and is therefore fired. He finds work as a makeup artist, but a fly keeps bothering him: he tries to kill it but he’s not able to do it. He ends up making a lot of trouble instead. The most serious one is when he cuts a minister’s moustache off and then he tries to stick it back on his face during a televised political rally. The fly dies under unexpected circumstances, but his troubles don’t come to an end. His wife (Hyer) leaves him because she thinks that he has tried to kill her, while the police brands him a subversive because he said the word “mosca” (fly) on television. Bob ends up going insane and arguing with a chimpanzee at the zoo: the monkey has the better of him, escapes from the cage and leaves the man behind bars, waiting to be fed nuts by the children.

It’s a lovely film, out of time, full of 68’s pop culture, but still enjoyable, moving among historical references and a visual, ludicrous and slapstick humour. The director carries forward a Freudian subject, very similar to Woody Allen’s ones, very unusual for an Italian comedy. The comic register continually varies between classical and sophisticated comedy to coarsest farce. Consequently the ups and downs cause both a certain lack of continuity and a sense of fragmentation in the movie. Though being a very intellectual film, it is recommended for everybody. Gassman plays in a wonderful way, in a role suiting his comic side, as mattatore (star performer), a year after Monicelli’s Brancaleone’s Army (1966) and in the same season as Dino Risi’s The Tiger and the Pussycat (1967). The wife’s role is played by the sensual American actress Marta Hyer, admired by the viewers in a very sexy bathing suit, at that time presented as “the answer to Grace Kelly from Universal”. Other characters include: Carmelo Bene (the priest), Massimo Serato (the policeman), Claudio Gora (the minister without a moustache), Gigi Proietti (the makeup artist), even the director of photography Aldo Tonti (the director), and the producer Cecchi Gori (the advertiser).

Review. Morando Morandini on line (two stars for critics, one for the audience): “Inspired by Tonino Guerra’s charming subject, suitable to Vittorio Gassman’s versatile comic and ludicrous side, Franco Indovina has managed to produce an unusual comedy, albeit too fragmented and unable to focus the Freudian themes treating the phobias and the neurosis caused by mass media. From a commercial point of view, a total flop”. Pino Farinotti (two stars): “A not completely successful apologue, in spite of the excellent cast”. Paolo Mereghetti (two stars): “An intellectual comedy which seems almost a Freudian study on persecutory pathology. Gassman denigrates himself in a very persuasive way, but he sometimes overdoes it trying to find the comic side of the situation. For that matter, we can notice a certain discontinuity in the script, written by six hands: Luigi Malerba, Tonino Guerra and Franco Indovina”.