Beginning today, the blog Gaspar, El Lugareño is pleased to announce a new section on the critical engagement of cinema by Gordiano Lupi. 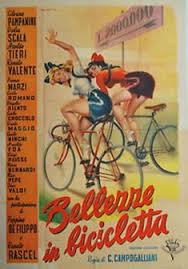 Carlo Campogalliani (1885 - 1974) was an Italian historic film director, son of wanderers, self-taught designer first, then theater actor. He begins to deal with cinema in 1909, as an interpreter of King Lear by Giuseppe De Liguori. Popular director like few others, he attended the most successful genres of the silent period, especially adventurous and peplum with the character of Maciste. Letizia Quaranta was his favorite protagonist who ended up becoming his wife, partner on set and in life. He worked in France, South America and Germany, but remained active in Italy even after the advent of sound, directing two films starring Ettore Petrolini. His post-war cinema followed the taste of the good mouth public, he attended the pink neorealism, anticipated the musical movie and also went back to the old mythological Maciste and Ursus. Active until 1961, he died in 1974 in Rome having gone through many periods of Italian cinema. (For further information: Roberto Poppi - The Italian Directors - Gremese ).

Beauties on bicycles (1951) is a romantic comedy of great popular success, followed by Beauties on scooters (1952), a sort of sequel to exploit the commercial phenomenon. The director created his most famous work after the war at the age of 66 years, seasoned as an author of melodramas and romantic stories. The plot revolves around the adventures of two penniless ballet dancers, Delia Scala and Silvana Pampanini (recited with their real names as if they interpreted their own) who go from Milan to Bologna to try to be engaged by Toto. A roadblock stops the journey and the enterpreneur and wealthy Giulio (Valente) invites the two girls to get into his high-powered car. The girls welcome the move but Giulio, infatuated with Silvana, tries to kiss her causing a negative reaction and her decision to get out. The girls end up in a country house and believing that they have to deal with a thug, run away at night to reach Toto. Another misconception: Toto is not him, but a hoaxer (Valdi) , the girls flee again, dressed as ballerinas, and are hidden in a barrack by a silly soldier ( Croccolo ). At one point, Delia and Silvana rent two bikes and continue the journey to Bologna singing the famous song Beauties on bicycles. Giulio reaches them once again, makes peace with them and invites them to dinner taking them away from the clutches of a bumbling mechanic (Rascel) that dissects the bikes. Aroldo (Tieri), Delia's jealous boyfriend, convinced that because of Giulio, he is going to become a cuckold, fights with his rival, but when he understands the situation becomes his friend. It all ends with a bike ride organized by Giulio's father (Romano), a kind of feminine stage ofTour of Italy, from Bologna to Milan, which the two girls win and marry their boyfriends.

The film is lyes within pink neorealism, so it must be taken for what it is and not judging it as within the Italian comedy, still far in time. The characters are stereotypical caricatures, while the shots of the expert Campogalliani try to avoid images of rubble and destruction. A photograph in black and white which resemble postcards that depict an Italy that is re-starting, where all goes well, populated by wealthy young men that run on expensive cars and girls who think only of romantic marriage. It is great about city scenes, and the sequences in the Bolognese countryside and the scenes at the Tour of Italy, with the people crowding the roadsides to incite the champs. Comic parts are well done, because interpreted by the likes of Peppino De Filippo, Carlo Croccolo, Renato Rascel, Dante Maggio, Aroldo Tieri and Arnoldo Foa. A funny scene that takes place in a supposed haunted house where two bumbling thieves as De Filippo and May end up running away scared by the presence of Pampanini and Scale. Great Renato Rascel as the son of a mechanic who messes it up everything by disasembling before the Delia and Silvana's bikes and immediately after Giulio's car engine. It is an episodic film in disguise, a container of sketchs, a comedy vaudeville signed by the couple Metz - Marquesas and a young Amendola. The film is lively, elegant, keeps alive the viewer's attention despite an irrelevant plot and thanks to the comedy and the graces of two scantily clad popular showgirls as Delia Scala and Silvana Pampanini. The expert Campogalliani also anticipates the seaside comedy and uses the ploy of the female cycling race to show a little legs to an audience not too accustomed to such visions. Beauties on bicicles is still liked today and it is not aged because of its naivety bottom, for the unreal optimism in which it is imbued, for it being a film out of time and history. The tune of the soundtrack of Amadeus Escobar is an historic achievement that will be sung for years by all Italians. All of us who were born in the late fifties, we have heard our mother or grandmother sing: "But where are you going beauty on a bicycle?"

Here are some critical opinions:

E. Fecchi from Intermezzo (No. 5, March 15, 1951 ): " If the whole movie had been maintained on the same pace of the first half, it would have been a masterpiece. There are a panache and an intelligent search of gags that we have not seen in other films, there is a logic, which , even for a brilliant film is undoubtedly an asset. There are two of our young actresses who have really given their maturity test (...) . In the second half there is the unfortunate incident of Maggio and Peppino De Filippo, who was supposed to be cut without mercy . "

We do not share the opinion of the scathing comedy scene of De Filippo - Maggio, which we see fresh and full of panache, and also believe that the level of the two segments of the film is not inharmonious.

Notifications film (vol. 29 , 1951): "The work has not artsy pretentions, but conducted with panache, is animated by the recitation of talented artists of magazine and comic theater."

Pine Farinotti gives three stars without motivating it. Morando Morandini two stars and three the audience: " Unpretentious, but spirited. Interesting document of an era that seems far away. " Paolo Mereghetti (a star and a half) is the least enthusiastic: " rose-water comedy with interludes of Pampanini singing typical themes of poor Italy, or praising the bike and the need of gift for all."