Habanera, a Portrait of a Cuban family (by Teresa Dovalpage) 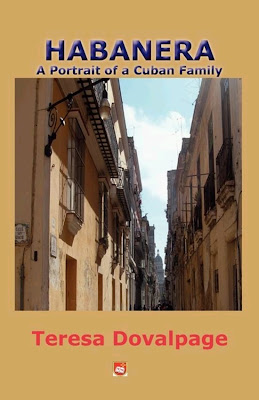 Teresa Dovalpage. Habanera, a Portrait of a Cuban family.
Mountain View, California. Floricanto Press. 2010.
----------------------------------------------------------------------
Chapter 2
We lived in a quiet suburb called Lawton. Every evening Muñeca and I sat on the front porch when the first fireflies appeared and the flowers of the night-blooming jasmine opened their petals. Their scent mixed with the smell of the rosemary, basil and cilantro plants that grew in the backyard. My grandma rocked back and forth and sang old songs of love. Her favorite was Se fue by Ernesto Lecuona,
Se fue para no volver,
Se fue sin decirme adiós.
Muy lejos de mí se fue
Matando mi ensueño de amor.
(He left, never to return,
He left, without saying goodbye.
He left, faraway from me,
Killing my dream of love.)
Would we also have to leave, never to return?
I had finally understood what la renuncia and the emigration forms were all about, and I didn’t like it. The idea of leaving Cuba and our old, but ample and fresh house, frightened me. I had just started school and teachers told us every day that we lived in the best country in the whole world, a lucky island where the government guaranteed freedom, health and education to everyone.
La Yuma, on the other hand, was an evil empire full of criminals who killed each other in their crowded streets. In Miami people were crammed into tiny apartments, worked ten hours a day and never saw a ray of sum. “Americans are racist,” said Maestra Mercedes, my first grade teacher. “They hate Latinos and do not allow them to eat in the same restaurants as Gringos. The Cubans who go to La Yuma become second-class citizens.”
“Why can’t we just stay?” I asked Muñeca after she and Ponciano had discussed the issue for the umpteenth time.
“Because I’m tired of living under Castro’s thumb,” she answered.
Every morning at school we repeated, “Comandante en Jefe, ordene!” and sang revolutionary hymns that praised Fidel and his comrades.
“But he’s our leader, grandma. Isn’t he—like—the best?”
“Of course not! He is a dictator! He keeps an eye on everybody, knows even what one whispers in private and has taken over the country.”
“Our house too? And the mausoleum?”
“Don’t ask so many questions, niña. Politics isn’t for kids. And don’t mind what your teachers say. We are going to Miami, hear?”
I got so panicky about the intended trip that I vomited on the spot. Gua! Forgetting her La Yuma dreams, Muñeca gave me a glass of water and hurried to prepare chamomile tea.
The acid taste of vomit was as familiar to me as my own skinny self. Because of my “nervous stomach,” as my grandma called it, I constantly threw up after meals. Sometimes I was able to hold it if I went to bed and lay down for ten minutes. But most days I didn’t even have time to leave the dining room and guaed there. No wonder I didn’t like to eat. What for, if everything was going to come back up in the end?
My lack of appetite was a source of mortification for everybody in the family, particularly Muñeca. She took it as a personal insult because she was the cook, and considered herself a good one. One evening at dinnertime she looked at my untouched dish and shook her head.
“If you don’t make an effort to eat, you are going to die,” she said. “You’ll get thinner and thinner until you turn into a spirit. Just like that, paf! And then…no more Longina!”

“Do spirits need to eat?” I asked, tongue-in-cheek.
“No. They can’t eat, play with their buddies or watch television.”
“I want to be a spirit, then. Like Doña Lola.”
“I’ve asked you not to talk about her.”
“Gua!”
“Ay, not again! Why are you puking when you haven’t even had a bite yet?”
My grandma ended up eating all the papitas fritas she had cooked for me, soaked in mayonnaise. I couldn’t stand those French fries. Even their smell made me feel nauseated.
Other times she made somber remarks about my future, “You’ll never be ‘developed,’ I’m afraid.” (“To develop,” in Muñeca’s vocabulary, was to blossom into a young woman.) You won’t be able to find a boyfriend and you’ll become a spinster, lonely and sour.”
“Developed” women like herself had big breasts and well-cushioned asses. Ma mère, however, was slender and had a modest butt. I took comfort in the fact that she had married Papucho, a handsome man, despite her obvious “underdevelopment.” There was still hope for me.
Doctors couldn’t find anything wrong with me. They concluded that the vomiting fits were caused by anxiety. Now, the idea of leaving Cuba for a place where we were not welcome made my stomach more nervous than ever before.
* * *
Papucho stayed in line for three days in front of the emigration building, waiting to get the forms. Despite her initial enthusiasm, Muñeca began to lose hope. “That good-for-nothing drunk will come back empty-handed,” she said to Ma mère. “I should have gone myself.”
It was the first time that Papucho’s alcoholism was mentioned around me. I had noticed that he often acted funny. He confused or slurred words, forgot to turn off the oven, walked unsteadily... Some mornings he got up late, said he had a headache and didn’t go to work. I knew that Muñeca and Ponciano didn’t like him too well. But did that mean that he was un borracho, a drunk?
My invisible companion and I discussed the “good-for-nothing drunk” comment at length. I said it was one of Muñeca’s exaggerated claims. But la otra maintained that my grandma was right. “We’ll starve to death in La Yuma if we depend only on Papucho,” she said.
“You are just like Ponciano,” I answered. “A crepehanger!”
At last Papucho came home, grinning proudly. He was not empty-handed. His white teeth sparkled when he handed my grandma the emigration forms. “We have one foot in Miami now!”
Muñeca kissed him. “But you have to stop drinking when we get to el Norte,” she warned him. “Ponciano is getting old so you’ll become the man of the house.”
“No problem,” my father answered with a reassuring smile. “I’ll take care of the family. Stonemasons make a lot of money in La Yuma. And I’ll stop drinking today. I won’t touch another drop of alcohol, I swear.”
They hugged each other.
“I’m sorry I’ve given you such a hard time all these years, Papucho,” Muñeca sniffled. “You are a good man.”
“Not really. I haven’t been a jewel, you know? But it’s time for me to shape up. And I will.”
Ma mère joined the embrace, also crying. It was a highly emotional scene that Ponciano watched, with a malevolent grin, from his urine-smelling room.