Celebrating the Knight's Centennial in Cuba 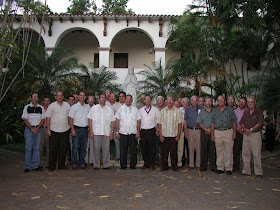 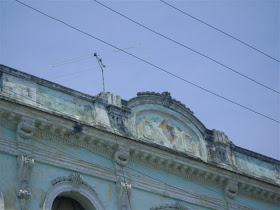 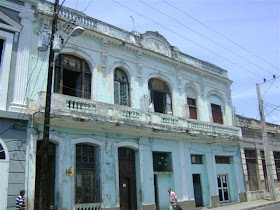 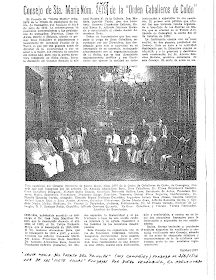 Celebrating the Knight's Centennial in Cuba

This article appeared in the July 2009 issue of Columbia and is reprinted here with permission of
the Knights of Columbus, New Haven, Conn--and of Maria de Lourdes Ruiz Scaperlanda, author.

The year was 1909. Plastic was invented. Censorship of motion pictures began. And 53-year-old American explorer Robert E. Peary became the first to reach the North Pole. It was also the year that the Order founded chapters in both Cuba and Panama.

Between the 1899 census and 1908 the population of the island of Cuba, celebrated as “The Pearl of the Antilles,” increased by 30 %, reaching over two million. Roughly the size of England and smaller than Virginia, the Caribbean island struggled to come into its own, politically, economically, culturally, after a fierce battle for independence from Spain. The Catholic Church in Cuba was no exception.

“Because the Spanish colonial government and the Church had been united, anticlericalism and Cuban patriotism were nearly synonymous,” noted Christopher J. Kauffman in "Faith and Fraternalism,” his book on the Order’s history. “Hence the Order’s anti-defamation character became the unifying force among practicing Catholics eager to assert the compatibility of Catholicism with loyalty to the anticolonialist basis of the Cuban political ethos.”

In November 1908, Rev. Edward Moynihan, O.S.A., of American-based St. Augustine College in Havana, wrote to Supreme Knight Edward L. Hearn requesting the Knights’ presence: “I believe it would be a very great good for the Church and I might say absolutely necessary at present as our people are not Catholic by practice, simply in name.”

About half of that first council consisted of Americans stationed during the second U.S. intervention of Cuba and all spoke English. But by the 1920s the membership in the Order was Cuban and Spanish speaking. The second Cuban council was instituted in Cienfuegos in 1921 (No. 2317, San Pablo), and a year later a council was founded in Santiago de Cuba (No. 2316, Santiago), hometown of Nuestra Señora de la Caridad, Our Lady of Charity, patron of Cuba.

The first exemplification of the Fourth Degree in Cuba was held in Havana in May 1937 under Supreme Master John Reddin. According to the Order’s archivist, Sue Brosnan, “The ceremonies were conducted entirely in Spanish and the class numbered 95 members including Archbishop of Havana Manuel Ruiz. The new assembly was named after [now beatified] Padre Felix Varela.”

“Council activities mirrored those of councils throughout the Order and included various social and religious functions, a blood donor program, as well as works of charity such as a free clinic to care for school children. The Cuban councils did not participate in the insurance program of the Order,” explained Brosnan in a report titled “The Knights of Columbus in Cuba.” In 1942 the first Circle (No.312, San Cristóbal) of Escuderos de Colón, Columban Esquires, was founded in Havana.

By 1959, the Golden Jubilee of the Order’s presence in Cuba, the Knights numbered 29 councils and nearly 3,000 members. The Order was present in all six Cuban Provinces (or states), and had 30 active circles of Columban Esquires.

According to historian Kauffman, “Since many Knights had joined in the struggle against President Fulgencio Batista, the Order confidently invited Castro to attend a Fourth Degree banquet in honor of the Golden Jubilee,” where State Deputy of Cuba, Julio Jover Vidal, presented Castro’s representative with a plaque.

In August of 1960, however, Supreme Knight Hart contacted Castro by letter, inquiring about the imprisonment of a brother Knight and assuring Castro that he “did not believe he would be guilty of any offense against your government.” According to Kauffman, “the Chief Director of the Prime Minister’s office responded that ‘serious charges’ had been posted against the Cuban Knight,” but assuring the Supreme Office that “no injustice will be done to him by the Revolutionary Government.”

“We were persecuted, watched, threatened by authorities,” describes Ignacio M. Ruiz Díaz, charter member and Grand Knight of Council No. 3778, San Rosendo, in the city of Pinar del Río. By 1959, Ruiz Díaz said, the new regime shut down the Council’s magazine, which he edited, “because we publicly critiqued their attacks on the Catholic Church and its moral principles, defending the faith values of Cuba’s founders, such as Servant of God Father Félix Varela.”

The Knights were a fundamental support in the growth of the Catholic Church in Cuba and specifically, in the promotion of lay apostolate, remarked Ruiz Díaz. “They offered moral, spiritual, and economic assistance. They were the first laity who publicly manifested their Catholic faith in all spheres of society. It is no surprise that as soon as Castro took power the Knights became persecuted as ‘ideological enemies’ of the Revolution.”

Along with imprisoning Knights, the government instituted “registros” or inspections of all their houses and prohibited public gatherings. To protect its 56 members, one of the Knights burned all official documents from Council No. 3778 at a rural location, including member information and initiation rituals, remembered Ruiz Díaz. “Our chapter officially dissolved, but we remained clandestinely united.”

After 1959, “Religious gatherings were prohibited and all groups serving and supporting the Church were persecuted. Catholic institutions dissolved. The Knights disappeared publicly, although many continued to meet in secret,” agreed Frank (Paco) Echeverría of Cienfuegos. “Even primate meetings were difficult and dangerous, not only for the Knights but also for their families. As long as possible, Knights continued to meet at the Chancery or in churches, carrying on the work of evangelization and helping the Church.”

Echeverría’s father, Francisco Echeverría (Grand Knight for Council No. 2317, San Pablo, in Cienfuegos) became “a victim of the political disaster of our homeland,” imprisoned from 1960 to 1979 for his religious beliefs and work, Echeverría said.

Echeverría, who has served as Grand Knight and numerous local and state-wide positions in Florida during his 41 years as a Knight, was one of 14,000 children who came to the United States in 1962 through Operation Peter Pan, the Catholic Church’s sponsored rescue mission that allowed Cubans to send their children to the U.S. unaccompanied by parents.

By the early 60s Cuban refugees flooded out of Cuba, countless settling 90 miles away from their homeland in Miami. Led by Grand Knight Luis Felipe Lay, the son of a Past State Deputy of Cuba, Council No. 5110, Our Lady of Charity, became in 1961 the first Spanish-speaking council. It was a virtual Cuban council in exile, with 14 Grand Knights from Cuba among its 150 members.

A letter from the Cuban State Deputy dated May of 1964 noted that the Order had approximately 1,000 active members in Cuba—with at least 60 members in prison, wrote archivist Brosnan. Two clubhouses were occupied by governmental agencies and others were closed. “A 1965 letter from the Officers of Council 3457 in Havana states that the council had resolved to suspend activities ‘due to the circumstances [arised] during the last days’.”

Although historian Kauffman maintained that in 1980 there were 30 councils in Cuba, from the early 1960s to 2008 councils were officially inoperative, completely isolated from the Supreme Office. Cuban representatives for the Supreme Council were chosen from Cuban exiles in the United States like Paco Echeverría, who has served as Alternate Delegate since 1997.

“We always maintained the hope that the Order will, some day, be able to reinitiate its work in Cuba,” said Echeverría, who became a Knight in Miami’s Council No. 5110 and Grand Knight in 1976. The work of the councils “was the glory of the Catholic faith in Cuba.”

Echeverría’s hope is now reality. In August 2007, Havana’s Archbishop Jaime Ortega Alamino attended the Supreme Convention and blessed images of Our Lady of Charity—which each state president took back to his jurisdiction for a yearlong Marian Hour of Prayer program dedicated to Our Lady.

In 2008, for the first time in fifty years, two Knights from Cuba attended the Supreme Convention in Quebec City as official Cuban delegates for Council No. 2479 (Santa María, Camagüey), originally founded in 1923.

After being in the hands of honest but non-practicing Catholics for many years, said Collantes Ramírez, the Council is working closely with the Archdiocese of Camagüey to recover the values that represent the Knights—charity, unity, and fraternity. “We don’t have the same financial or social resources of the past, but we have a great spirit of faith and hope in the Lord. We gather always, much like the early Christian community, to hear the teachings of the Apostles and to communal life, to the breaking of the bread and to the prayers [Acts 2:42].”

Preparing for first and second degrees, the Council meets the last Saturday of every month for Mass, focusing on a “process of consciousness,” Collantes Ramírez explained, exploring each member’s conception of membership “so that each one will feel accountable as a Knight and [be aware of] why he has decided to be a part of the Council.”

More than an organization, “we aspire to become a communion of brothers in the faith, and from this premise, to live out our acts of charity and evangelization,” emphasized Collantes Ramírez. “With this confidence in Christ we can hope that our future will be better than the present, as we do good and trust in the Lord.”